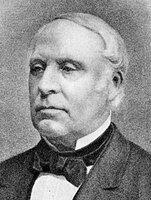 The factory is named after Knut August Almgren who started the business. He was born in 1806 in Västerås. At the age of 16, he came to Stockholm and started working at the Mazer & Co silk factory, where a big brother was a partner. Knut August became a skilled salesman.

At just 22 years old, he became ill with lung disease and to recover, he traveled with his employer's ship to the south of France for a temporary stay in the more favorable climate. Luckily, Knut August recovered, studied French and worked for a time at a silk factory in Lyon, where they used a completely new and state-of-the-art method for weaving, the jacquard technique.

The French did not want to spread the knowledge about the new technology to foreign competitors, but Knut August convinced them that he was French and therefore had the opportunity to study and learn the new technology. When he was fully-trained, he went home. In his luggage he had a number of dismantled jacquard mechanics which he unlawfully smuggled with him. 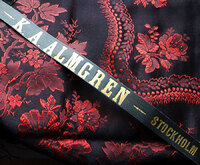 In 1833, Almgren started his own company and began manufacturing silk fabrics with the jacquard technology in small premises at Mosebacke square on Södermalm in Stockholm. The business started at a time when the silk industry was in decline. Although there were 21 other silk factories in Stockholm at this time, it was halved compared to the 18th century.

Despite this, things went well for K A Almgren, who was already appointed Royal Court Supplier in 1844. The competitors fell away one by one, from 1869 there were only two silk factories in Stockholm. In the 1870s, the company reached its peak with production in four different premises. Of the more than 280 employees, the vast majority were women who worked with weaving, reeling , warping and fringing. The largest product was silk scarves that were in demand by women throughout the country. From 1904, Almgren's silk weaving mill was the only remaining silk weaving mill in Stockholm.

Changed conditions and a new start

In connection with the so-called TEKO crisis (Textile and clothing crisis) in Sweden, the new companies were shut down. Many Swedish textile companies were forced to close down or move their production abroad during the 1950s and 1970s when competition from cheaper imported goods became too great.

In 1974, Almgren's silk factory was closed, but only temporarily. The weaving mill was started again in 1991 by Oscar Almgren. In 2002, the business was transformed into an independent foundation with support from the City of Stockholm and the Stockholm Region.

Pictures from the past

We use cookies to enable the proper functioning and security of our website, and to offer you the best possible user experience.

You can customize your cookie preferences here. Enable or disable the following categories and save your selection.